These are the three mottos of Vilnius’ bohemian quarter Uzupis Republic that accompanies the 38 sections of the Uzupis constitution (as articles 39, 40 and 41).

What started a summer evening in 1997 or 1998 (they are not sure), was the beginning of what today is one of the coolest and most original areas of Lithuania’s capital Vilnius, Uzupis Republic.

The founding fathers, Romas Lileikis and Tomas Cepaitis, declared the formation of The Republic of Uzupis and independence from Lithuania on behalf of the artists and the free spirits of Uzupis in 1997 or 1998 (1998 seems to be the consensus).

The Republic has its own flag, currency, president, cabinet of ministers, an anthem, an army of 11, a 38 (41) points constitution, and many consuls and “embassies” around the World.

Visitors to Vilnius often ask us if is this real, if they are serious, and if are they in fact trying to break out of Lithuania?

The short answer is, “no, they are not”.

Uzupis is an area of town which traditionally has been home to many of the city’s artists and bohemia.

The formation of the republic is simply a results of two creative minds being inspired by a beautiful summer evening, accompanied by a barbecue and a drink or two…

The statehood of the Republic is recognised by no government and is a tongue-in-cheek concept.

The founding fathers declared April 1st as its national day to further underline this.

However, what most likely was intended as a creative 0utlet and “for the fun of it”, took on a life on its own and grew into something bigger than its 2 founders.

But let’s back up a bit and take it all from the start.

“Romas should be the President, and Tomas the Minister of Foreign Affairs, and sometimes also King.”

The formation of The Republic of Uzupis

As already mentioned, the concept of this bohemian “statehood” was formed in 1997 or 1998.

Artistic endeavours are the main preoccupation of the Republic.

The founders, Romas and Thomas, are themselves artist, with Romas being a known musician, poet and film maker.

It was these two fellows who wrote up the 38 points constitution (you will find the full constitution at the bottom of this article).

At some point they realised that a Republic also needs leaders.

They agreed that Romas should be the President, and Tomas the Minister of Foreign Affairs, and sometimes also King.

Nobody knows who wrote the different articles in the constitution.

However, Romas is a dog lover and Tomas a cat lover.

Therefore, it is generally understood that Tomas must have written article 10 and 13, while 11 and 12 must have been penned by Romas.

Article 10. Everyone has the right to love and take care of the cat.

Article 11. Everyone has the right to look after the dog until one of them dies.

Article 13. A cat is not obliged to love its owner, but must help in time of need.

The first years of the Republic

The idea of a “republic” was well received by the city.

The media loved it, so did the official government of Lithuania, and the tourism industry jumped of joy.

Something fun and unique!

As the people of Uzupis grew conscious about their “statehood”, they became proud to call themselves a citizen of Uzupis.

The most “famous” Uzupisian is former Major of Vilnius, Arturas Zuokas.

In order to support and build up upon the increased awareness of The Republic of Uzupis, it was proposed to print the constitution of a metal plate for all to see.

The only logical place this was “The Parliament”, where you will still find it on the wall.

Later, two versions, one in Lithuanian and one in English, was produced and put up on the “long wall of Paupio street”. 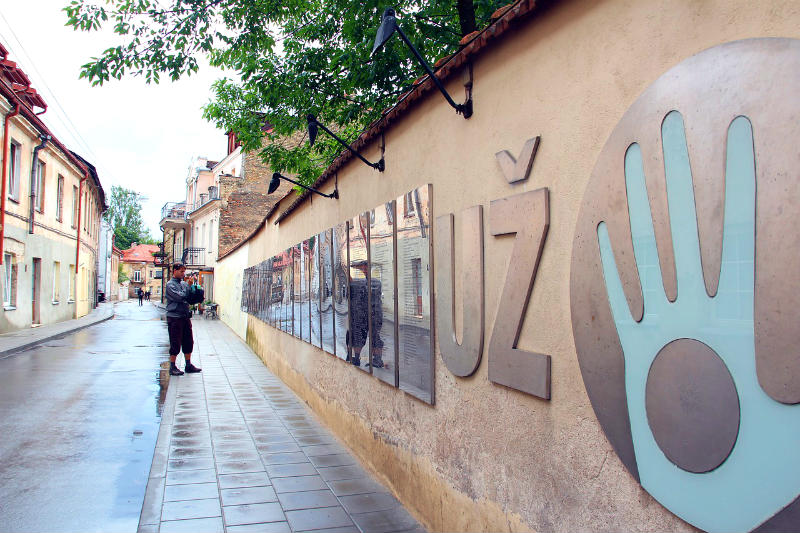 Ever since the first two plaques were put up, new translations have been added regularly, and is fast approaching 40 languages.
As a testament to the growth and awareness of this culturally unique part of Vilnius, the translations and production is usually sponsored by the Embassy of that country to Lithuania.
The list of translations is too long to list here, but it has become rather impressive over the years.
In recent years Japan and Korea got their translation, while both Gaelic (Scottish), Urdu, Portuguese and Dutch came in 2019.
Over the years, as former residents have moved away from Uzupis and Lithuania, they have, by their own wish, become their new home country’s (un)official Ambassador of Uzupis to that country.
Today Uzupis has over 100 “Embassies”, among the most noteworthy are:
But also, you will find “Embassies” in places such as:
…and many more!
The movement is far reaching and truly international!

Expanding Uzupis' reach in the World

Uzupis is an open, welcoming, non-discriminatory state, where everyone is accepted as they are, no matter status, color, sexual identity or preference.

The Republic is about peace, and love, and art, and connecting as human beings.

As part of its expanded reach, internationalisation and importance in the World, the ministry has expanded, as well has its consulates.

A few years back, the Republic made history when they, for the first time in history, appointed my dear friend and fellow Norwegian, Mr Ulf Halland, to Culture Minister of The Republic of Uzupis.

How many ministers there are is a bit unclear.

But what we know for sure is that is in addition to President Romas and Foreign minister and sometimes King Tomas, there is a Finance Minister without a portfolio, a Minister of Environment, The Culture Minister, and a Sheriff.

After the introduction of a Norwegian minister to Uzupis, the reach of the Republic has spread all over Norway (my home country).

This is because as a Minister, you have the right and obligation to appoint new Consuls to the Republic.

Today there are many in Norway.

In addition, I am myself a Consul too.

In 2018, I was appointed Consul of The Republic of Uzupis for Hafrsfjord and All Viking Kings.

Yes, it is a mouthful.

I am from Stavanger and Hafrsfjord specifically – the place of the most important Viking battle in Norwegian history, The Battle of Hafrsfjord in 900.

This was the final Viking battle unified Norway and created The Kingdom of Norway.

Many of the translations of the constitutions has a history to it, more than just a mere translation. Sanskrit was selected because Lithuania’s unique ties to the ancient language. Russian, Polish and Belarusian and Yiddish came early as well, as they are all spoken “Vilnius languages”.

Uzupis is today a modern part of town with new developments being build.

However, the original bohemian part is still very much intact and active, mostly in and around the Uzupis Parliament and along the river Vilnele.

There are many restaurants and cafes in a relatively small area.

Uzupis is a fun, cute and unique part of Vilnius which is well worth exploring during your stay in Vilnius.

Here at DMC Baltic we generally does not have any activities or restaurant we use here for the groups.

However, as part of our popular Vilnius Treasure Hunt, or as part of the Vilnius Challenge activity, we have one post at The Parliament, where the participants gets to learn a little bit about the area, as well as they have to go to the “Great Wall of Constiutions” and find “their language” translation and take picture of it.

Do you have a group that would love to come to Vilnius?
We promise show them an awesome time and make sure they come back to your agency next time! 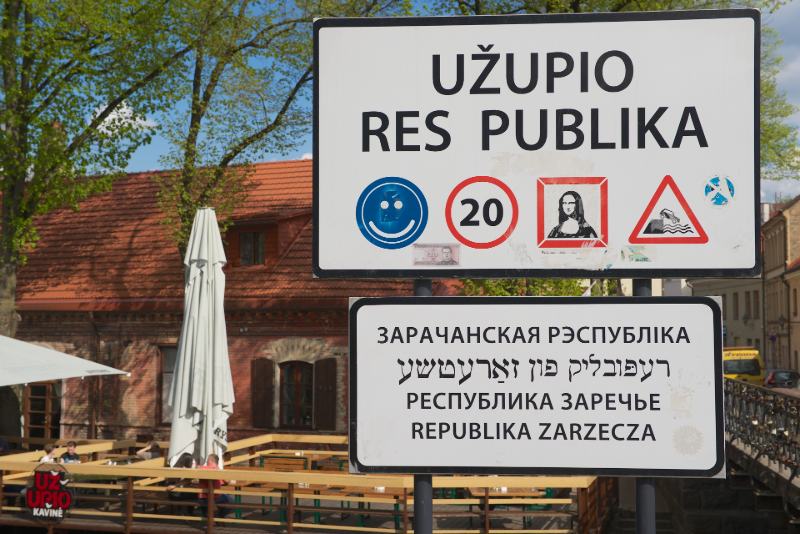